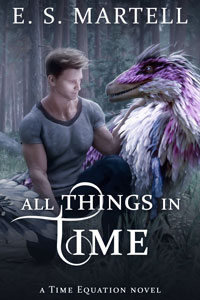 My latest release is now available on Amazon, B&N, Kobo, Apple, and elsewhere.

I’m somewhat ashamed of my lack of productivity. Last year (2021) was mainly devoted to worrying about external issues: politics, the Covid-19 virus, society in general, and so on. The best I can say for the whole year was that I learned if you watch too much news, you’re likely to be too depressed to write. When NANO month rolled around, I decided to participate but not to actually sign up. As a result, I wrote All Things in Time in 30 days.

Lest that sound like a lot to you, it only involved writing about 3,000 words per day. That’s approximately the average length of one of my chapters, so it’s not a terribly difficult task.

Well, not difficult if the book is flowing well. I know when I’ve got a good thing going. It’s when the characters tell me what they’re going to do. That means I’ve developed their characters successfully. It’s fun when they do things I hadn’t planned initially. (and, no, I’m not crazy…I think:-)

So, back to the point. All Things in Time was based on the relationship between Kathleen and Cadeyrin’s son Cole and Lola, the Deinonychus chick. If you haven’t read All the Moments in Forever, the idea of intelligent deinonychus (raptor dinosaurs for those of you who also didn’t watch Jurassic Park — and yes, I know those cinema monsters were roughly based on Utah Raptors, but they were somewhat closer to deinonychus size — might sound strange. But, my rationale is if some Amazon Gray parrots have a vocabulary of over 1000 words that they can use appropriately, and some do, then perhaps a prehistoric raptor might have had enough cognitive ability to learn to speak.

The problem with such a rationale is when you once adopt it; it becomes a license to carry it to extremes. Lolita (Lola’s mother) was the first to learn to speak, and she has a distinct personality with a wicked sense of humor. While she uses shortened and often non-grammatical English, her daughter Lola makes her best effort to use correct English. Her reasons are complex. 1. She grew up with Cole as her close companion, and 2. English is her native tongue.

Still, she is a deinonychus, a killer raptor weighing about 110 lbs with the ability to kill prey many times her body weight. Her problem is that she is so close emotionally to Cole that she cannot envision having a mate of her type. On the other side of the equation, Cole admits that he is close to Lola, even that he loves her, but his feelings are tempered by his knowledge that he needs a human female to raise a family. Lola knows that also, and it causes her a tremendous amount of grief.

She repeatedly tries to find a way to cope with the problem, but nothing works. Meanwhile, Cole, off at college in the future, meets a beautiful but narcissistic and sadistically twisted girl. Devonette has a long string of male conquests that she has destroyed on social media, and she sets her sights on Cole. She finds his somewhat exceptional strength and high maturity level irresistible and eventually falls for him…as much as she can.

The story is complicated by the intrusion of the time-traveling Sasquatch elder (first seen in Time Enough to Live). He takes pity on Lola and imparts the Sasquatch method of time-travel through the astral realm. As her first act, she tracks Cole in the future and realizes she has competition for his affection. She is nearly caught in a vast on-going time storm, but the Sasquatch saves her, cautioning her to avoid that area in her travels.

The complication is that Devonette’s father, a multi-billionaire of dubious origin, wants Cole’s mother, Kathleen’s time equation. At his insistence, Devonette sets Cole up for capture with the idea that his mother will give up the equation and other assets for his freedom. This act of betrayal leads to a complex web of actions in which all the characters are entangled. But I’m not going to spoil the story for you.

The underlying message is that external form need not define and constrict true love. Does this sound like it might be a little risky? Well, maybe, but since gender dysphoria is a “thing” in our society, why not species dysphoria?

Given that idea, my challenge was how to write an adult-level novel and circle around Lola’s problem until a successful resolution develops. The restriction was how to keep that resolution within the realm of acceptable actions. My solution became apparent to me as the story developed. It only required a certain amount of death and heartbreak for my characters. In retrospect, I believe if they were asked, the answer would be: “It was worth it.”

The book is available on all ebook outlets and in paperback (if you ask at your local bookstore–it should eventually be available on Zon).

Here’s the blurb for the story:

But, what if the two lovers cannot possibly make their relationship work?

The two grew up together. Each often knows what the other is thinking. They get along perfectly. Unfortunately, they belong to different sentient species. There is no chance for them as a couple.

Each needs a mate of their own species, but finding a suitable life partner can be problematic. There will almost always be missteps, sometimes even fatal mistakes.

There is no such thing as an impossibility in the infinity of years available throughout eternity. The laws of probability imply that given enough time, any event, no matter how improbable, has a chance of happening.

The ability to jump through time and space can make things easier or more difficult. It also attracts those who will kill to get the secret for themselves.

When all of infinity is available to search for a mate, will it be necessary to go beyond death to find success?

This is the fifth story in the Time-Equation Series.